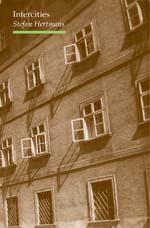 A collection of philosophical travel stories

Intercities is an erudite collection of philosophical travel stories about cities

including Vienna, Dresden, Trieste, Venice and Sydney. The title reflects both

his stories. In his travels Hertmans continually draws upon world literature: in

Vienna he walks in Kafka’s footsteps, in Trieste he encounters Svevo, Joyce

and Winckelmann, and in the reconstructed centre of Dresden he meets the

hero of one of Harry Mulisch’s novels. ¶ The author of a substantial oeuvre,

Hertmans is perpetuating the Renaissance tradition of the Grand Tour. As the

writer approaches the end of his journey, the cities melt together and reflect

one another in his mind. The result is a beautiful balance between intellectual

understanding and personal impressions. His great strength is his ability

but he has also written extraordinary travelogues and plays, and

his novels and collections of short stories have been consistently

praised by the critics. The quality of his work has won him awards

in both the Netherlands and Flanders, including the Belgian State

the Royal Academy for Dutch Language and Literature.